Climate Change as an Anti-Disciplinary Problem: An Interview with Joel Wainwright

Climate Change as an Anti-Disciplinary Problem: An Interview with Joel Wainwright 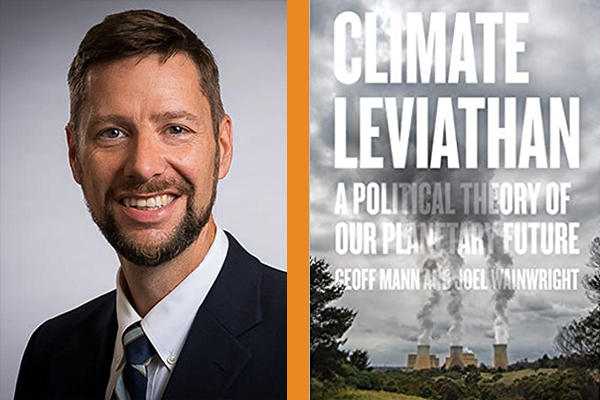 The following interview of Joel Wainwright was conducted by Global Arts + Humanities Discovery Theme Program Manager, Puja Batra-Wells. Wainwright is a professor in the Department of Geography, where he studies political economy, social theory and environmental change. He is author of Decolonizing Development (2008), Geopiracy (2013) and, with Geoff Mann, Climate Leviathan (2018).

Puja Batra-Wells: To what degree are cross-disciplinary perspectives important to your work?

Joel Wainwright: They are important for most scholarship today. For instance, recently I worked with a team of researchers to study environmental changes underway in southern Belize. Our team included a soil scientist, a water scientist, a pair of agroecologists, a remote-sensing specialist, plus some social scientists, including me — a social scientist working along the edge of the humanities. And everyone works together to try to figure out what is changing and why. This sort of arrangement can lead to surprising results. For instance, in one paper focusing on factors determining water quality, the soil scientist in our team — an Ohio State PhD student named Henry Peller — produced our hydrological model of changes in runoff. His work on this started as a lab assignment in a course on land surface hydrology. Later, another undergraduate team member, Patrick Clearly, who was initially focused on political economy, recently published a paper based upon his undergraduate research about dietary change in an Indigenous community in a journal of food studies. In the sciences, there tends to be a lot of this sort of interdisciplinary teamwork, where everyone contributes what they can, regardless of the supposed boundaries around disciplines.

PBW: What do you see as the major challenges of doing cross-disciplinary research?

JW: The humanities may not lend themselves as well to clear and objective definitions. People may not agree, to give some examples, about the meaning of concepts like ‘ideology’ or ‘race’ or ‘capitalism’. It is more difficult to work together across boundaries if your concepts are not relatively clear and fixed. These differences stem from the fact that in the humanities, we are always reexamining historical and social matters from which we cannot disentangle ourselves. These challenges do not mean that we should not aspire to collaboration. On the contrary. But it means that collaboration on problems that span the sciences as well as the humanities requires working out some agreements on basic concepts and approach.

PBW: Can you provide an illustration?

JW: Sure. For instance, recently I co-authored a book, Climate Leviathan, a work on the political philosophy of climate justice. We wanted to answer the question, “how is climate change likely to change our world’s political and economic arrangements?” To pursue such a question, I had better agree with whoever I am writing with about the basic meaning of a number of relevant concepts, like social justice, capitalism, the state and so on. And we would also need to agree on the appropriate theoretical approach to examining the interrelations between these things. That is no mean feat because, as you know, scholars in the social sciences and the humanities do not share common conceptions of them. Not at all.

Fortunately, my co-author on that book — Geoff Mann, professor of geography at Simon Fraser University— and I do largely agree on those things. We are both Marxists who share a background in the natural sciences and teach about philosophy and political economy in geography departments. Yet, reflecting upon it, even given all that we share in common, it is remarkable how much time Geoff and I spent before we wrote the book just talking around and around about our basic concepts. That is, I suppose, the great strength of the humanities: it teaches you a certain patience with returning to basic questions again and again.

JW: I might like to draw a distinction between cross-disciplinary methods and anti-disciplinary problems. The former expression, as I understand it, refers to situations where researchers take up a question in a way that involves combining concepts and methods from different disciplines, like the situation I just described with the team of scientists in Belize. We needed to collaborate to answer our question, but at the end of the day, that sort of research does not usually provoke change within disciplines. In Kuhn’s terms, most normal science today is cross-disciplinary or interdisciplinary.

By contrast, as I have elaborated elsewhere, I see climate change as an anti-disciplinary problem, a problem that defies the typical organization of knowledge. That is to say, climate change is a special sort of problem that shows — sometimes in stark ways — the limitations of our disciplinary knowledge and the way that our thinking is divided by disciplines. While it is possible to study climate change from the perspective of the natural sciences, we do not have anything like an adequate curriculum on the social and political side. Neither do we see the sort of work oriented toward the much-needed social transformation for climate justice. Candidly, the university has not risen to this challenge. We have a great deal to do.

PBW: What ethical considerations drive your interest in climate change?

JW: Climate change presents itself as the greatest ethical challenge of our lifetime. The essential problem is that the people who will suffer the most from climate change — poor people and youth (as well as those to come in the future) — did not cause the problem and have no voice at all in the present political arrangement. By contrast, those responsible for creating the problem have great political power and will not suffer the consequences. This is clearly an unethical arrangement. In fact, to find a parallel of such a grave situation of profound inequality, of injustice, is difficult. To describe it as humanity’s greatest ethical crisis sounds hyperbolic. But that is how I see it.

PBW: In one sentence, what is the value of cross-disciplinary research to the study of climate change?

JW: I would say that climate change is an anti-disciplinary problem. To address it in anything like a just fashion will require a radical approach to transforming knowledge and social power.