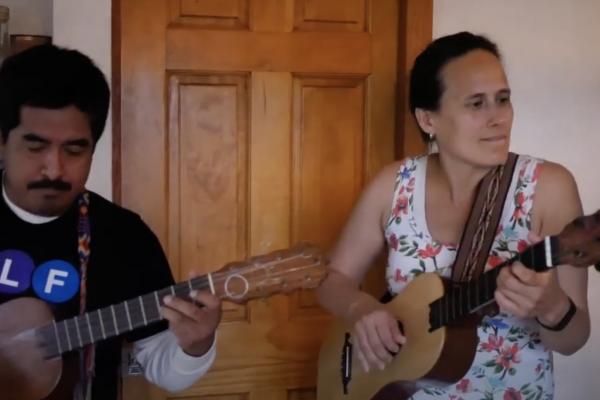 By Sophia Enriquez, GAHDT graduate team fellow and PhD student in the School of Music 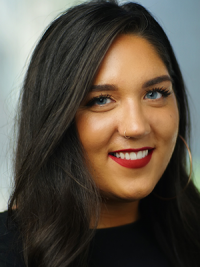 There is a booming community of Latinxs in the Appalachian region of the United States. Yet, when I describe my research with Latinx musicians in Appalachia and the Southern United States, the general reaction is one of surprise — one that reveals the tendency to reinforce imagined cultural borders demarcating who, where and how one makes home and belongs in the United States. Growing up as a Latina in rural Southern Ohio, the coming together of Appalachian and Mexican cultures was never far-fetched; rather, it was fundamental. The notion of being "Mexilachian" is also foundational for the work of Estela Diaz Knott.

Knott is a Mexican-American musician who grew up in the Shenandoah Valley of Virginia. Knott performs Mexilachian music with the Lua Project, a four-piece music collective that blends Appalachian traditions such as balladry and bluegrass with the sounds of regional Mexican folk genre son jarocho. In 2019, the Lua Project received a grant from Virginia Humanities to compose original songs inspired by the stories of Latinx migrations to the Shenandoah Valley. For this project, titled "Mexilachian Son: Songs for an Emerging Virginia Culture," the group partnered with son jarocho master Zenen Zeferino of Veracruz, Mexico. Zeferino traveled to Virginia in May of 2019 and was featured in a series of performances across Charlottesville and Page County. I had the opportunity to work with Zeferino and Knott together, expanding my role as researcher to collaborative musician.  In June, Knott and I traveled together to visit Zeferino in his home state of Veracruz, Mexico, and to attend a series of son jarocho performances as part of the Festival del Río y La Palabra. There, Knott performed a Mexilachian version of son jarocho standard "La Guacamaya," co-written with Zeferino.

In the midst of the sweltering heat following the Festival del Rio, Knott and I made our way with Zeferino to his grandparent’s pueblo of Chacalapa to attend a fandango — an all-night gathering during which local jarocho musicians convene around the tarima, a wooden dancing platform, to accompany the sounds of zapateada style dancing and exchange improvised poetic verses, or decimas. Knott noted the similarities of the zapateada and Appalachian clogging, making a convincing case for how the pervasive “café-con-pan” rhythms were present in both traditions. I recalled some of Zeferino’s verses about the desert of the U.S.-Mexico border as I pushed through a crowd of sweaty bodies, but Knott’s Mexilachian verses like “The warbler and the sparrow, Meet guacamaya en Mexico…Flying high on wings of barrow, Fat on ortiga y romero” rang, too, in the vision of seeing Zeferino return to Veracruz with his Mexilachian comrades.

Mexilachian music is invaluable work: it fosters cross-cultural conversations and relationships and encourages us to listen more closely for voices that are often left out of both historical and contemporary narratives. From Charlottesville to Chacalapa, Zeferino and Knott’s exchange of Latinx and Appalachian cultures connects communities, disrupts wide-held assumptions about who belongs where, and nourishes compassion in a moment when Latinx belonging and personhood are increasingly under attack.